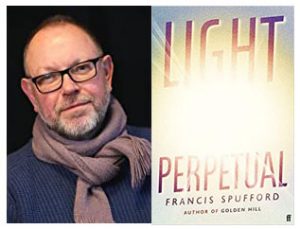 Francis Spufford will be in conversation with Chris Schüler about his new novel Light Perpetual.

November 1944. A German rocket strikes a branch of Woolworths in south-east London, and five children – Jo and Valerie, Alec, Ben and Vernon – are atomised in an instant.

But what if that rocket never lands? If a single second in time is altered, and the five go on to experience the extraordinary, unimaginable changes of the twentieth century; to live out all the personal triumphs and disasters, the second chances and redemptions denied them?

What kind of future would there be for clever, impulsive Alec? What would happen to Val in the world of men, beckoning beyond her all-female household? What would become of Vern’s greed – and his helplessness in the face of song? Would light or darkness fill Ben’s fragile mind? And where would the music playing in Jo’s head take her?

Francis Spufford was born in 1964, the child of two historians. He is the author of five highly praised works of non-fiction, including Backroom Boys, Red Plenty and Unapologetic. His first novel, Golden Hill (2016), won the Costa First Novel Award and the Ondaatje Prize, and was shortlisted for the Authors’ Club Best First Novel Award. He is married to an Anglican priest, has two daughters, and teaches writing at Goldsmiths College, London, just next door to where a V2 fell on a branch of Woolworths.