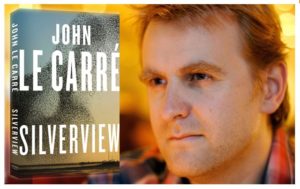 Silverview is the mesmerizing story of an encounter between innocence and experience and between public duty and private morals. In this last complete masterwork from the greatest chronicler of our age, John le Carré asks what you owe to your country when you no longer recognize it.

Started in 2013, le Carré revisited the novel repeatedly even as he published other work. He requested his son, who writes as Nick Harkaway, to complete any works that remain unfinished upon his death. After le Carré’s death in December 2020, Harkaway realised that an unpublished work remained, concluding that is was not so much “incomplete” but “withheld.” Published in 2021 with an afterword by Harkaway, Silverview is superb novel, in turns an espionage thriller, political rumination and unflinching self-examination.

Nick Harkaway joins our March lunch to discuss his father’s final book, one that “is fraught, forensic, lyrical, and fierce, at long last searching the soul of the modern Secret Intelligence Service itself. It’s a superb and fitting final novel.”

Nick Harkaway was born in Cornwall in 1972. Author of four novels, The Gone-Away World, Angelmaker, Tigerman, and Gnomon, he lives in London with his wife and two children.

To book please contact the booking office at bookings@nlc.org.uk or call 020 7968 0912. The two-course lunch starting at 12:30pm followed by coffee and mints costs £32. Please book early and inform the club of any dietary requirements