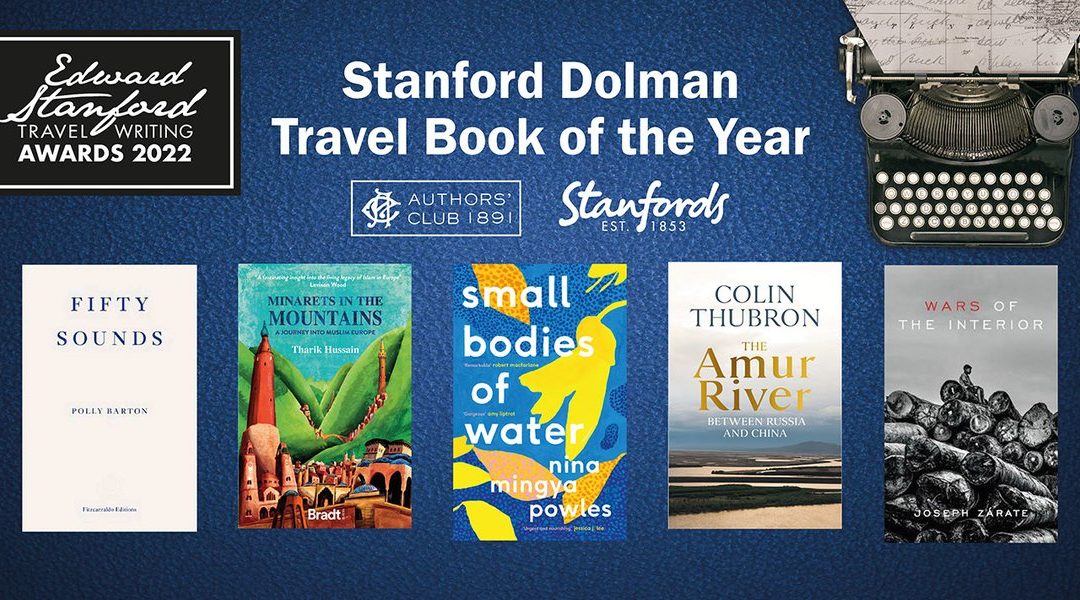 In partnership with the Authors’ Club, the shortlist is as follows:

Why Japan? In FIFTY SOUNDS, winner of the 2019 Fitzcarraldo Editions Essay Prize, Polly Barton attempts to exhaust her obsession with the country she moved to at the age of 21, before eventually becoming a literary translator. From min-min, the sound of air screaming, to jin-jin, the sound of being touched for the very first time, from hi’sori, the sound of harbouring masochist tendencies, to mote-mote, the sound of becoming a small-town movie star, FIFTY SOUNDS is a personal dictionary of the Japanese language, recounting her life as an outsider in Japan. Irreverent, humane, witty and wise, Fifty Sounds is an exceptional debut about the quietly revolutionary act of learning, speaking, and living in another language.

Minarets in the Mountains (Bradt Guides) by Tharik Hussain

Minarets in The Mountains, the first English travel narrative by a Muslim writer on this subject, also explores the historical roots of European Islamophobia. Tharik and his family learn lessons about themselves and their own identity as Britons, Europeans and Muslims. Following in the footsteps of renowned Ottoman traveller Evliya Celebi, they remind us that Europe is as Muslim as it is Christian, Jewish or pagan.

This lyrical collection of interconnected essays explores the bodies of water that separate and connect us, as well as everything from migration, food, family, earthquakes and the ancient lunisolar calendar to butterflies.

In his eightieth year, Colin Thubron takes a dramatic 3,000-mile long journey from the Amur’s secret source to its giant mouth. Harassed by injury and by arrest from the local police, he makes his way along both the Russian and Chinese shores on horseback, on foot, by boat and via the Trans-Siberian Railway, talking to everyone he meets. By the time he reaches the river’s desolate end, where Russia’s nineteenth-century imperial dream petered out, a whole, pivotal world has come alive.

The Wars of the Interior (Granta) by Joseph Zarate, translated by Annie McDermott

Joseph Zarate’s stunning work of documentary takes three of Peru’s most precious resources – gold, wood and oil – and exposes the tragedy, violence and corruption tangled up in their extraction. But he also draws us in to the rich, surprising world of Peru’s indigenous communities, of local heroes and singular activists, of ancient customs and passionate young environmentalists. Wars of the Interior is a deep insight into the cultures alive in the vanishing Amazon, and a forceful, shocking expose of the industries destroying this land.

The winner will be announced on Thursday 3 March.