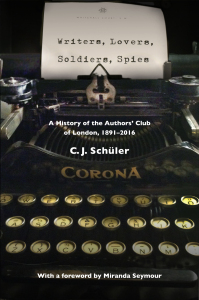 ‘Packed with anecdotes… reads like a roll call of the greatest British literati’ – Danuta Kean, The Guardian

‘The personal shenanigans of the club’s members… bring this deft little history alive’ – Kathryn Hughes, The Mail on Sunday

‘This exotic history, doubtless something the restless Besant would be pleased with, is a monument to his rich life’ Ham & High

Where did Oscar Wilde indignantly denounce the censorship of his play Salomé? Where did Arthur Conan Doyle and Jerome K. Jerome read from their unpublished manuscripts? Where did Ford Madox Ford’s lover Violet Hunt leave his clothes after he left her for another woman? Where did Graham Greene drink with Kim Philby and Malcolm Muggeridge?

Founded by Sir Walter Besant in 1891 to provide a place where writers could socialise, the Authors’ Club was a home from home to many of the leading figures of English letters in the late 19th and 20th centuries. Its Presidents have included George Meredith, Thomas Hardy, J.M. Barrie and Compton Mackenzie, while Emile Zola, Mark Twain, Frances Hodgson Burnett and T.S. Eliot spoke at its dinners.

Rarely has such an array of writers gathered under one roof, yet the eventful history of the Authors’ Club has never been written… until now. To commemorate the 125th anniversary of the Authors’ Club, its former chairman has delved into its unpublished archives. Along with memoirs, diaries and newspapers, they provide the basis for a lively, entertaining and candid account of the Club’s often turbulent history.

This absorbing narrative sheds new light on the lives and opinions of many celebrated authors through scandals, financial crises and two world wars. It tells how Arnold Bennett worked on his novels in the club library while Conan Doyle won the billiard handicap four times; how Lloyd George assembled his ‘kitchen cabinet’ here during the First World War; and how the MI5 spymaster Maxwell Knight recruited agents during the Second. Passionate disagreements among club members over great events such as the General Strike and the Spanish Civil War have also reflected changing social attitudes and views on literature and art.