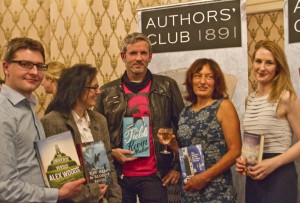 The Authors’ Club Best First Novel Award has been won by Jack Wolf for his astonishing debut The Tale of Raw Head and Bloody Bones. The prize was adjudicated by the novelist Isabel Wolff, who announced the winner and presented the cheque for £2,500 at a reception at the National Liberal Club in London on Tuesday 3 June.

“It was a privilege to be asked to judge this prestigious award,” said Isabel Wolff,  “and a great pleasure to read the six shortlisted titles: Lucy Cruickshanks’ searing portrayal of post-war Vietnam in The Trader of Saigon; Gavin Extence’s touching coming of age story The Universe Versus Alex Woods; Kevin Maher’s exhilaratingly funny, dark, tale of growing up in rural Ireland, The Fields; Eimear McBride’s extraordinary, transfiguring A Girl is a Half Formed Thing; and The Banner of the Passing Cloud, Anthea Nicholson’s beautifully written novel about life in post-Stalin Georgia.

“But in the end it was Jack Wolf’s astonishing debut that really stood out. The Tale of Raw Head and Bloody Bones is an extraordinary novel that explores the 18th-century tension between reason and emotion, science and superstition, in an absolutely masterful way. It’s both thrillingly erudite and infectiously entertaining, completely compelling and morally unsettling. The voice never falters, and the execution is masterful. What a marvellous book – a tour de force.”

Jack Wolf added: “I was thrilled to win the Authors Club Best First Novel Award last night, and to hear my work praised so highly by Isabel Wolff. The award is a tremendously affirming and encouraging prize to win, as the way in which novels are long and shortlisted is entirely transparent and reflective of both novelistic excellence and readers’ enjoyment. I now can’t wait to read the other shortlisted novels.”
___________________________

This entry was posted in Prizes and tagged Best First Novel Award, Raw Head and Bloody Bones. Bookmark the permalink.