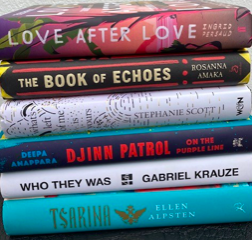 ELLEN ALPSTEN, Tsarina (Bloomsbury) The judges commented: A compelling blend of fact and fiction that creates a memorable portrait of the rise of Catherine I of Russia in the violent court of Peter the Great.

ROSANNA AMAKA, The Book of Echoes (Doubleday) The judges commented: In this vivid portrayal of two characters struggling to forge better lives for themselves, Amaka explores how the trauma of slavery continues to reverberate down the generations.

DEEPA ANAPPARA, Djinn Patrol on the Purple Line (Chatto) The judges commented: Anappara draws us into a real-world horror story, yet there’s always a thread of hope and humanity in this richly realised novel.

GABRIEL KRAUZE, Who They Was (4th Estate) The judges commented: In this  powerful first novel, Krauze grabs the reader by the throat and thrusts us into the heart of gang wars, drugs and violence.

INGRID PERSAUD, Love After Love (Faber) The judges commented: A vivid and atmospheric exploration of prejudice in Trinidad. Lyrical and beautifully crafted –

A poignant debut about love and friendship.

STEPHANIE SCOTT, What’s Left of Me is Yours (Weidenfeld & Nicolson) The judges commented: Inspired by a real case in Japan, Scott’s multi-layered novel  expertly weaves together a crime of passion and a love story.

Lucy Popescu (chair of the judging panel) commented: “It’s lovely to see women dominating the shortlist. We are transported around the globe in these terrific debuts, which cover an array of subjects from love and murder in Japan to London’s gang culture, from Tsarist Russia to modern-day slavery in Nigeria, from the the plight of children in the slums of India to the struggle for acceptance in Trinidad. We are fortunate to have Michèle Roberts to decide the overall winner.”

The winner will be announced at a dinner at the National Liberal Club: Wednesday 30 June * Please note new date

The winning novel is selected by guest adjudicator Michèle Roberts from a shortlist drawn up by a panel of Authors’ Club members, chaired by Lucy Popescu.

The prize is open to any debut novel written in English and published in the UK between 1 Jan and 31 Dec 2020. The prize of £2500 exists to support UK-based authors, publishers and agents, so the novel must originate in the UK and not have been published anywhere else in the world before its UK publication

Inaugurated in 1954, the Authors’ Club Best First Novel Award is now in its 67th year, making it the longest-running UK prize for debut fiction and – except for the James Tait Black and the Hawthornden – the oldest literary prize in Britain.

About The Authors’ Club

Established by Walter Besant in 1891, the Club has provided a social meeting place for writers for 130 years.